This paper focuses on the various methods to test moisture permeability and the analysis of the influencing factors of test results. Currently, outdoor sports are relatively active, and the outdoor clothing needed will be paid more attention. A good outdoor sportswear should have its own unique characteristics. Water vapor permeability is an important basic one.

WVT is the water vapor quality passing through the unit area of the sample vertically within the specified time at the speed of g/m²·h or g/m²·24h under the condition that the sample is keeping the specified temperature and humidity on both sides.

The vapor quality passing through the unit area sample vertically in the prescribed time at the speed of g/m²·Pa·h under the condition that the sample is keeping the specified temperature and humidity on both sides, and under the unit vapor pressure difference. 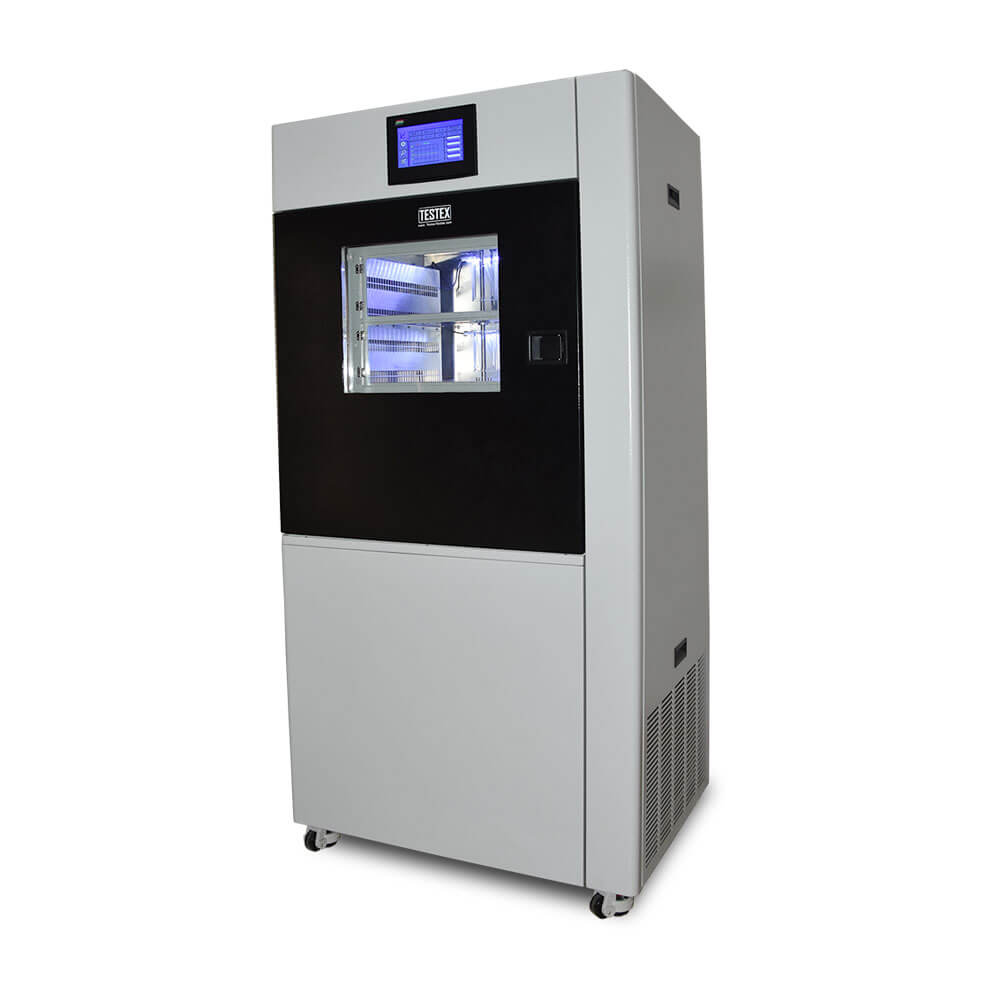 First, expose the desiccant (anhydrous calcium chloride) particles (0.63~2.5 mm) to an oven at 160℃ for 3 hours to make them completely dry. The, place the dried desiccant particles in the test cup but careful that keep them 4mm lower than 4 mm of the sample, and place the sample cup in the test instrument. After about bout 1 hour of humidity testing and controlling, begin to weigh; weigh again after a period of time for testing. The moisture permeability of the sample is obtained by applying the weight difference between the two weighings to the formula.

First, inject water at the same temperature conditioned by the test condition into the measuring cylinder, and limit the amount of water according to the requirements of each standard. Then, place the test sample on the test cup, and place the cup straight into the test instrument. After a period of time for balancing, begin to weigh, and after testing for a while, weigh again. The moisture permeability of the sample is obtained by applying the weight difference between two weighings to the formula.

First, inject water at the same temperature conditioned by the test condition into the measuring cylinder, and limit the amount of water according to the requirements of each standard. Then, place the test sample on the test cup, and place the cup in reverse into the test instrument. After a period of time for balancing, begin to weigh, and after testing for a while, weigh again. The moisture permeability of the sample is obtained by applying the weight difference between two weighings to the formula.

First, inject a solution of saturated potassium acetate the test cup at the level of about 2/3 of the cup. Then seal the sample in the test cup and reversely place it in the test tank. Finally, weigh respectively the total mass of the test cup before testing and after 15 minutes.
The above method is described according to JIS L1099 standard.

It is not strange that the same batch of fabrics or fabric testing will have a great difference with ready-made clothing testing when they are sent for moisture permeability test. For producers, these differences are impossible; but in my years of experience, it is impossible to conduct a test without differences; the key is whether these differences are within a reasonable range. Here are some factors that I think affect the results of the moisture permeability test.

1 Equipment: The main parameters of permeability test are temperature, humidity and wind speed.

A. Wind Speed–Difference of Wind Speed on the Surface of Sample Cup
The number of sample cups varies greatly with the moisture permeability testers provided by various manufacturers on the market. Sample cup manufacturers even have eight, so how to ensure the uniformity of wind speed on the surface of these eight sample cups has become a difficulty in equipment design. Wind speed is the main parameter that directly affects the test results. Like the three test specimens of a sample, if wind speeds on the surface of the cups don’t agree with each other, it will directly cause the failure of the parallel test results to be parallel. Any devices with too much parallelism, I believe, cannot be used in the test.

B. Wind Speed–Differences in Wind Speed Settings among Equipment
Different brands of equipment have different designs for wind speed. Some use horizontal impeller parallel air supply design; some use fan air supply and ensure air circulation in the test box through the design of the box, which I call fan-supported air supply for the time being. Personally, I think that in the horizontal air supply system, the surface wind speeds of each small sample can reach the same level in the event of the horizontal air supply on the same level. However, in the fan-supported air supply system, no matter how the samples are placed, the surface wind speed of each sample cannot reach the same. Consequently, the results of parallel test will be worse.

2 The effect of desiccant

3 Sealability of sample and test cup

In the method of inverted cup test, the density of sample is an important part. Sealing is not a problem for most samples, but it may be difficult for a few composite fabrics. For samples with poor sealability, the fabrics will be wetted and diffused during the testing process and at the edge of the test cup, the water starts dripping to wet the surface fabrics. After this phenomenon occurs, the wind speed will take away the moisture of the wetting part of the surface material. The moisture permeability is not generated by the moisture permeable coating or film. Such test results are often much larger than their true moisture permeability, each test results varying greatly, and so it is impossible to find the true value of the test sample. This also results in the loss of testing purposes for producers.

The samples tested for moisture permeability should be representative, and without creases, holes, or any obvious thickness unevenness of coated fabrics. These are the main factors that will inadvertently affect the test results, especially the uneven thickness of coated fabrics and the air bubbles generated by the coating, which can not be observed with the naked eye in many cases and is most easily ignored by the experimenters.

In our daily life, we can observe that garments are often subjected to tear and…

How to Choose Suitable Permeable Materials for Different Industries with Different Needs?

What is Air Permeability? The permeability of gas to film, coating, fabric and other polymer…

How to Determine the Color Difference in the Garment Manufacturing Industry?

In the garment manufacturing industry, one of the major issues is to determine the color…

Categories
Recent Posts
Follow Us
Follow us on social media to stay on track with the latest news.
Copyright TESTEX Textile Testing Instruments - All Rights Reserved