The color fastness to perspiration (acid and alkaline) refers to the ability not to fade and not to stain when the dyed fabric is perspired, and it is one of the main color fastness testing items of textiles. In daily life, textiles clenched to the skin for a long time and come into contact with the sweat secreted by the skin, which may lead to the transfer of dyes to the skin, so it is particularly important of colour fastness to perspiration test of clothing products.

Comparison of the color fastness to perspiration test for different versions of ISO 105 E04:

Comparison of the standard of colour fastness to perspiration in different countries:

It can be seen that compared with ISO 105 – E04: 1994, ISO 105 – E04: 2008 is less two kinds of a single fiber, hemp, and CA tow. From the point of my view, the main reason is that the properties of hemp and cotton are close to each other, while the properties of CA tow and viscose are close to each other, and the choice of the second fiber is basically similar. From the original 9 kinds of single fibers to 7 kinds of single fibers, it is more in line with actual operation. The requirements of adjacent fabric for version 2013 and version 2008 are the same.

1.2 Comparison of Treatment Methods for Composite Specimen after Immersion

Table 3 Comparison of Effect of Different Way of Placing Perspiration Rack on Color Fastness to Acid, Alkali of Fabric 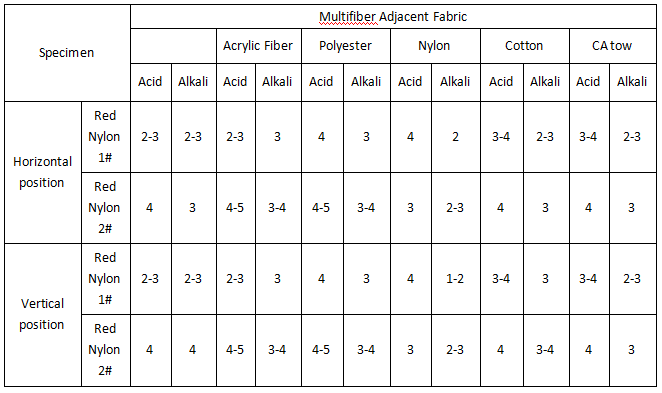 1.3 Ways of Placing Perspiration Rack into the Oven

Through the experiment comparison, ways of placing perspiration rack into the oven affect the test result a little at the same testing condition(see Table 3). Therefore, ISO 105 E04: 2013 allows for two ways of placement.

Table 4: Comparison of three standards for color fastness to perspiration

It can be seen that differences exist between three kinds of standard for color fastness to perspiration, meanwhile, common point also exits.

2.1 Three kinds of principle of standard test are basically the same through comparison. Through a comparison of technical parameters, they have similarities and great differences as well.

2.3 Through an army of tests, it is found that ways of composite specimen controlling its pick up ratio after immersion affect test results much during the process of test. In order to make test results more referential, experimenters should conduct a lot of tests, so as to make pick up ratio of composite specimen after immersion not only in accordance with standard requirements but make its surface with liquid well-distributed.

2.4 Perspirometer and procedure: the main equipment to be used is perspirometer tester and drying oven. In addition to the requirements of heavy hammer, other equipment can basically be used.

How to Choose Suitable Permeable Materials for Different Industries with Different Needs?

What is Air Permeability? The permeability of gas to film, coating, fabric and other polymer…

Why do Bulk Production have Color Difference after Customers have Confirmed Hand Samples?

How Can You Stand the Color Difference of the Printing and Dyeing Cloth? In textile…

Categories
Recent Posts
Follow Us
Follow us on social media to stay on track with the latest news.
Copyright TESTEX Textile Testing Instruments - All Rights Reserved